20 Best things to visit in the Triana Seville neighbourhood

On the west bank of the Guadalquivir river is the popular neighbourhood of Triana. The residents of Triana have traditionally been called “trianeros”. Legend holds that Triana was founded as a Roman colony by the emperor
Trajano. Its urban growth occurred with the construction of the Puente de Barcas in 1171.

Its castle, known later as Castillo de San Jorge, was built with the intention of defending this Puente de Barcas and represents the birth of the Triana neighbourhood. The history of this neighbourhood is the history of its streets, its buildings, its people, etc.

This neighbourhood welcomes us in its popular Plaza del Altozano to take us through its streets full of vitality, such as Betis or Alfarería, which remind us that Triana was a sailor and potter neighbourhood

It is also famous for its bullfighters, its cantaores (flamenco singers) and its bailaores (flamenco dancers). Since time immemorial it had a large population of gypsies, who lived in the area known as the “Cava de los Gitanos”.

After the American Discovery, a great majority of sailors born in Triana were part of these expeditions.

Is construction was finished in 1852. It was made in iron with a design similar to the Carrousel Bridge in Paris. Besides, it is currently the oldest iron bridge in Spain. Before its construction there was a floating bridge on boats built in the Arabic period (Puente de Barcas). Built in 1928 by the famous Sevillian architect Aníbal González, who also designed the Plaza de España. Inside it is a painting of Our Lady of the Carmen, patron saint of the sailors, with great devotion in the Triana neighbourhood. It is one of the most traditional food markets in the city. Inside the market you will see a lot of stands of fruit, vegetables, meat and fish. It is also a good place to enjoy the traditional Sevillian gastronomy in its bars. You can also enjoy a flamenco show or take cooking lessons. It is one of the neuralgic centres of the Triana neighbourhood and it is the entrance to the neighbourhood from the bridge of Triana. In the middle of this square, you will find the monument to the Flamenco Art, and next to it, you will see the bronze monument of the bullfighter Juan Belmonte, one of the most famous Sevillian bullfighters. It is an archaeological site of the ancient Inquisition Castle. It was situated in this place from 1481 to 1785. The
entrance is by the market. It is a narrow passage which was part of Saint George’s Castle. The prisoners were led along this alley to be judged by the Court of the Inquisition. 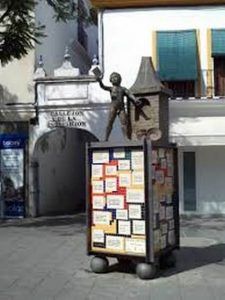 On weekends, several artisans from the neighbourhood of Triana exhibit their creations on the banks of the Guadalquivir River. This market takes place in the Paseo de la O. Access through the Alley of the Inquisition from Castilla Street. It is one of the last neighborhood “corrales” in Triana that still retains its original appearance. The “corrales” were communal homes in Seville with the traditional Sevillian architecture, with a fountain in the middle of the courtyard and corridors with rooms for each family that live there. 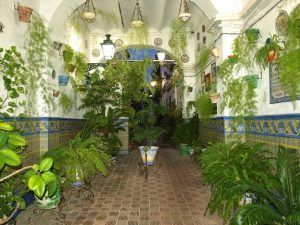 It is the headquarters of the Brotherhood of the O. Inside there are the images of Maria Stma de la O and Ntro Padre Jesús Nazareno. Inside it is the image of Stmo Cristo de la Expiración, popularly known as “El Cachorro”. It was made by the sculptor Francisco Ruiz Gijón (17th century), being one of the most impressive and popular crucifixes in Seville. This ceramic centre is a former ceramic factory. It holds an important collection of ceramic pieces, as well as a space for the interpretation of the Triana neighbourhood history. It is the headquarters of one of the most traditional brotherhoods of Seville. Besides, inside yhe chapel is the sculpture of Juan Pablo II. Inside it is the image of Ntra Sra de la Esperanza de Triana. It is one of the most popular virgins in Seville, which goes in procession on the dawn of Easter Friday. It was built in the 13th century and is known as the Cathedral of Triana. Its main altarpiece stands out, with a collection of valuable paintings on tables by the painter Pedro de Campaña (16th century). It is another example of a neighbouring corral, which retains its traditional architecture and decoration. It is in the Plaza de Cuba. The “Zero mile” of the Earth which commemorates the 500th anniversary of the first voyage around the world (1519-1522) started in Seville by Fernando de Magallanes and finished by Juan Sebastián Elcano also in Seville. It is located in an old 16th century Sevillian convent. A horse-drawn carriages collection takes place inside. It’s the most popular festival in the Triana neighborhood. Triana has its own fair and it takes part in the end of July between Betis Street and the Plaza del Altozano.

The Betis street is then full of Fair stands where the people gather in order to enjoy the traditional gastronomy while in the Plaza del Altozano, free concerts generally of flamenco and copla, take place in the middle of the square. It is a main street that introduces us to the Triana neighbourhood after crossing the Triana Bridge. Since it was established as a pedestrian street this street is full of shops and terraces with a lot of life. You can access all our Guided Tours in Seville and our Day Trips from Seville visiting our website.

THANK YOU SO MUCH!