When you book with an account, you will be able to track your payment status, track the confirmation and you can also rate the tour after you finished the tour.
Sign Up
4753
PhotosPricesDetails and ItineraryFAQ's

Join us on our guided tour of three most important monuments in Seville: the Cathedral, the Giralda and the Royal Alcazar, all of which have been declared World Heritage Sites by UNESCO.

During our visit, you will be accompanied by one of our official guides, who will provide us with fascinating details about the history and popular traditions related to these monuments. Monument tickets are included and, in addition, if you book with us, you will skip the lines.

Want to join us? * Seniors: with original IDs or Passport.

Variable start time. Select green marked days on the booking form to see the start time of each day.

The available days are marked in green in the booking calendar. This is a high demand tour, we recommend you to book well in advance.

Cathedral of Seville, Giralda and Alcazar skip the line tickets. Official guide who will accompany you during the whole tour.

There is a regulation on clothing for access to the Cathedral of Seville: «For everything, we ask you to uncover your head when you enter and to refrain from wearing beach shoes. Ladies will not be able to access with strapless shirts and mini shorts and men with tank tops.»

From May 2020, no refund of the Alcazar ticket price (15€ including management fees) will be allowed due to the cancellation of the tour.

If you need to cancel your booking, please, contact us.

What will we see during our Cathedral and Alcazar of Seville guided tour?

The first part of our tour will be focused on the visit to the Royal Alcazar of Seville. An impressive palace surrounded by walls that was built throughout different historical ages. From the Medieval Age, through Islamic art and including Mudejar and Gothic styles from the Castilian period, it later incorporated Renaissance and Baroque elements.

The course of history and the vestiges of all these periods make this monument a unique place in the world that should not be missed. You will be surprised by all the details and treasures hidden inside the palace and even more so when you get to know its exuberant and well-tended gardens.

We will not leave the Alcazar without visiting every corner of the Palace, walking through the Lion’s Gate, the Hall of Justice, the Patio de la Monteria, the Mudejar Palace, the Gothic Palace or the Gardens, with its famous Pond of Mercury among others. We will also have the opportunity to stroll peacefully across the gardens surrounding the palace, which display a rich variety of botanical species. The Alcazar is regarded as the oldest palace in Europe still occasionally in use.

A stone’s throw from the Real Alcazar, the Cathedral of Seville is one of the finest examples of Gothic Architecture in Europe, as well as the world’s largest Gothic cathedral. The Tomb of Christopher Columbus ‘Cristobal Colón’ and the altarspiece inside the cathedral are some of its hidden treasures. The cathedral also contains the ‘Biblioteca Columbina’, namely, what remains of an originally impressive library with over fourteen thousand volumes.

One of the most special moments of our walking tour will be our climb to the Giralda, unanimously regarded as the symbol of the city and the culminating expression of its artistic and cultural past. At a height of over one hundred metres, the top of the monument offers splendid views of the whole urban area.

In short, a fully enjoyable and fascinating experience of over three hours which will have an everlasting effect on your memory.

Do you join us?

Ana Mena
I went to Doñana National Park with Exprilo and it was an amazing experience, I actually learned a lot about the National Park, which is the biggest in Europe ;) They were very friendly and close, made us feel very comfortable. We also had lunch there in a typical place and enjoyed it a lot. Totally recommend the trip with them!

Funny peaceology
wow, there is no denying the fact that it was an excellent tour. so interesting that i wish to be on the tour for the rest of my life

Syed Ibad Shah
I had been wanting to go to Granada for a long time, and I decided to do it with Exprilo. The guide explained secrets that I did know I enjoyed the trips very much and looking forward to have more with them

The Smiles of our travellers

The city where dreams come true Autumn is coming to the Doñana National Park. Day No matter how many time we visit you, you’ll nev Voucher: Once your booking has been confirmed, you will receive an email containing your booking voucher. You can print it out or download on your smartphone/tablet to show on the day of the activity. Anyway your guide will have your booking details and also it will be enought to present your id document.

How to book our Seville Alcazar Cathedral & Giralda guided tour? To reserve the activity, choose the date and complete booking form. After complete the booking you will receive your confirmation immediately.

More questions: If you still have more questions, check out our section on frequently asked questions. If you need help to book an activity or have any enquiries, please contact us. 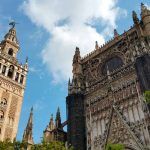 Book Now
From20 €
See all our tours and day trips